Failed Careers of the Mirror-Road

Some coast-themed failed careers for an Electric Bastionland adventure location that I have in the works, although all of them except maybe the Oneiric Neanderthal should fit into your standard Bastionland game without any modification.

1. BEACHCOMBER
Many odd things lie washed in sand and shingle. You made your living walking the beaches in search of them.

The Amphibian Conservationist Union: If you bring harm to an amphibian, add £250 to your debt per affected amphibian.

WHAT BEACH DID YOU COMB?

£1 You Wandered the Mist-Draped Mudflats Around Cobbesmouth, a Miserable Deep Country Town: You can breathe salt water but have bulging, unblinking, watery eyes.

£2 You Combed the Windswept Sands of Inisradacach: Take a surfboard and a buoyancy-aid.

£3 You Sifted Through the Stinking Shingle Around Puerto Guano: Take a large but flightless seagull (DEX 12, 5HP, d6 Claws). You stink of bird shit.

£4 You Scavenged the Ruins of Asburing Boardwalk, a Dilapidated Waterfront Fairground:

Take a string of solar-powered fairy lights and a battered acoustic guitar.

£5 You Combed the Sunny Beaches of the Electrum Coast: Take a bottle of coconut rum, a pair of sunglasses and a floral-patterned shirt.

£6 You Scrounged Among the Wrecked Ships of Cape Dread, Where Captain Grace Gideon Made Her Last Stand: Take a rusted pepperbox gun (d6, breaks on a 6) and a mouldy tricorn hat.

WHAT’S THE STRANGEST THING YOU EVER FOUND IN THE SURF?

2HP An Ancient Carved Antler: Once per day, tap against someone’s temple to turn their legs into the lower body of a deer. In this centaur form they can move at triple their normal speed and have +d6 Dexterity - the antler loses all power on a roll of a 5 or 6.

3HP A Hagstone: Staring through the hole in this rock causes all otherworldly things to be revealed with a faint orange glow.

4HP Four Fronds of Hexed Kelp: Whoever consumes a frond is cursed with dehydration and will stop whatever they are doing to drink any fresh water in sight for the next five minutes.

5HP A Mermaid’s Purse: Break to gain control over water of equal volume to a small swimming pool. One use.

the Gúga; Seabird meat, for the plates of rich Bastiard gourmands.

The Jetsam Row Aquarium and Maritime Museum: Take shared ownership of an old inflatable dinghy, Interesting specimens of aquatic life pay off this debt at twice their normal value.

WHY DID THE HUNT END?

£1 Oil Spill Ravaged the Island’s Ecosystem: Take a monkey-wrench, a bag of sand, and a kill-list of oil company executives.

£2 The Birds Failed to Return From Migration One Year, Having Moved to a Safer, More Remote Island at the Other Side of the World: Take a compass and sea charts..

£3 Your Boats were Raided by a Gang of Vegan Vikings: Take a pair of binoculars and replace cured seabird meat with dried sea-lettuce.

£4 The Volcano that Made Up the Bird’s Island Erupted, Leaving Nothing Behind: Take a metal case full of shards of obsidian; Brittle but incredibly sharp, too small to be effective weapons but potentially useful as caltrops or cutting tools .

£5 Your People Grew Tired of the Gúga-Folk’s Life, and Moved to Find Work in the City: Take a shell necklace as a memento of home and a hopelessly outdated map of Bastion..

£6 Your People were Cursed by a Powerful Demon of the Sea for the Slaughter of its Most Serene Creatures: Take a battered crossbow (d6, bulky). Cursed to never sail again; When on a boat at sea, you become nauseous and hallucinate strange lights and dark tendrils below the surface, here to drag you down.

WHAT BIRDS DID YOUR PEOPLE SEEK AND WHAT ELSE DID YOU HARVEST FROM THEM?

1HP The Platinum Petrel; For its Iridescent Feathers: Take a bag of 3 Enthralling Plumes. Snapping the shaft of a plume causes it to glow with a bright white light for 1 minute. Upon seeing it, a person or creature of your choice will stop at nothing to obtain the plume while it glows.

2HP The Mariner Albatross; Whose Wanderings Cross the Whole World:  Take a pair of wings fashioned into a hang-glider.

3HP The Orbital Gannet; Whose Dives Pierce the Sound Barrier: Take a javelin carved from a bill (1d10, pierces straight through flesh, allowing multiple targets to be hit if standing in a line, can be thrown through water without resistance, shatters after use).

4HP The Charcoal Guillemot; For its Valuable Liver-Oil: Take a small cask of oil, highly flammable but also quite nourishing when consumed, tastes disgusting.

5HP The Harlequin Puffin; Almost Too Cute to Kill. Almost: Take a runtish but adorable puffin that you adopted after killing its parents (STR 3, DEX 5, CHA 13, 1HP).

6HP The Hellraiser Skua; All Fisherfolk Fear its Talons and Beak: Take many scars and an eyepatch.

The Fisher King: A haughty and oversized kingfisher, Lord of all the creatures of the river. Will be harassed by swarms of small birds and the occasional water vole while travelling by boat on any river in Deep Country.

HOW DID YOU GET HERE?

£1 Rest of Flock Migrated: Take a bird ring with electronic transmitter and a stolen receiver that can track its location.

£3 You were Human Once, Transformed by Machine Experiment: Take a fuzzy memory. You can speak to humans in a rough, honking dialect.

£4 An Earnest and Deeply-Held Desire to Cause Problems on Purpose: You are DEPRIVED if you have not caused at least one person moderate-to-minor inconvenience within the last 24 hours.

£5 Sold to some Gormless, Deep Country Rube on the Promise of being able to Lay Golden Eggs. You Cannot and were Released: Take a bottle of hard liquor.

£6 Escaped from a Farm and Yearning for Freedom: Take a badminton racket (d6). Your right wing is clipped, you cannot fly.

WHAT KIND OF GOOSE ARE YOU?

1HP A Spur-Winged Goose: Replace serrated beak with carpal wing-spurs (d8, Once a day can poison target, causing them to vomit uncontrollably for 1 round).

2HP A Barnacle Goose: You can communicate fluently with crustaceans and convey basic concepts to all sea creatures.

3HP A Cackling Goose: Once per day, you can excrete half a pint of dung that can corrode most inorganic substances.

4HP A Red-Breasted Goose: Take a small but vicious falcon (DEX 15, 3HP, d6 Claws) with which you have a symbiotic relationship; the falcon protects you in exchange for warnings of danger and a tribute of soft, downy feathers for its nest.

Your kindred lie dreaming, neath silt and shingle. You walk in the waking world,

for now at least.

You must pay off the debt before a version of your party brought in from an alternate timeline does.

Muddy hide clothing, a necklace of shells and talons, an earthy, salty smell.

BEFORE THE DREAMING BEGAN, WHAT WAS YOUR ROLE IN THE TRIBE?

£1 Shaman: Take a tall staff from which feathers and shells hang (d6) and some psychedelic mushrooms (3 doses).

£3 Chieftain: Take a flint axe (d6) and a headdress made from black grouse feathers.

£4 Tracker: Take an atlatl and 3 throwing spears (d6)  and a heavy fur hood made from bearskin.

£5 Artist: Take a bone hammer (d6) and some ground up pigments.

£6 Elder: Take a strong branch (d6), a broken limb, and knowledge of how to survive the harshest environments.

WHAT GIFT DID YOUR KINDRED BURY YOU WITH ALL THOSE MILLENIA AGO?

1HP Swan-Wing Burial Shroud: When laid across a person’s body they fall into a trance. Their spirit is projected from their body and is able to walk invisible to all but Neanderthals and certain aliens and machines. The spirit retains sight and hearing but cannot interact with the physical world. The spirit can be projected in this way for 1 hour before it loses all connection to its physical body and cannot repossess it.

2HP Rhino Horn with Symbolic Incisions: Dropping the horn in boiling blood and inhaling the fumes grants a vision of the direction of and distance away from an individual person or animal of your choice.

3HP Whalebone Owl: Can see in the dark as well as an owl when carried.

4HP Vulture-bone Flute: Scavenger animals are charmed by the music of this flute and may offer aid to the performer.

5HP Cave Bear Skull: When worn and a specific chant is recited, the spirit of the bear inhabits the wearer - You must attack every living creature in sight for 5 rounds or until all creatures present have been killed, melee attacks do d10 damage and your STR is increased by d6 for that time.

6HP Birch Tar and Bat Guano, Wrapped in Saiga-Skin: A small amount thrown on a fire will cause the fire to ignite and grow into a tall column of bright orange and purple for a short time.

So this is my first post of what I hope will be many. Been thinking about dipping my toe into this osr-ish blogosphere thing for a while now. This blog will be the place where I post various rpg related projects I have rolling around in my head at the moment, the first of which will probably be the aforementioned adventure location: Mirror-Road to Fowl Island, which I hope to have done by the end of the year and maybe put out for free on itch and drivethru sometime in 2021.

The Adventure will be a "depthcrawl" in the style of Emmy Allen's Stygian Library and Gardens of Ynn across a causeway where time breaks down. It will be for Electric Bastionland but will be broadly compatible with any old-school system.

Stay tuned for the adventure itself and more details about the kind of game things I want to write.

Failed Careers of the Mirror-Road

Some coast-themed failed careers for an Electric Bastionland adventure location that I have in the works, although all of them except maybe... 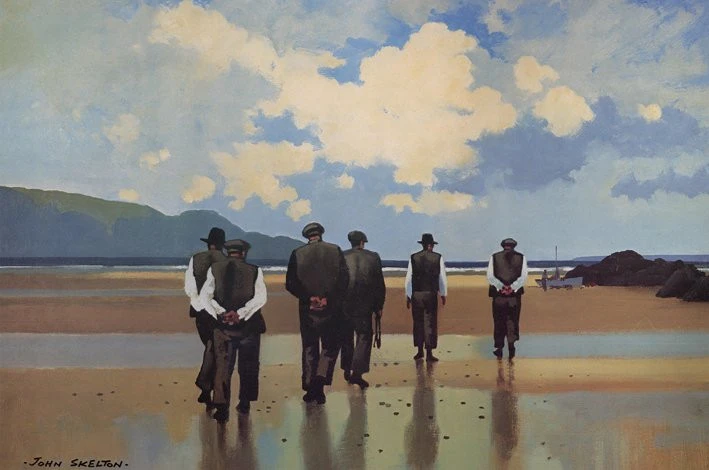