"My challenge for you all is thus:

Decided to pick the YA book series Animorphs, a favourite of mine growing up.
I would like to preface this by saying that I have not read an Animorphs book since I was around thirteen and I didn't even read that many of them; just the six or so that were available in my school libraries,  so I'm assembling this based on my fuzzy recollection and Wikipedia synopsise. I've given generic names to the alien races because a bunch of proper nouns flying around sucks when reading an intro to a new setting or system. Anyway, here's the game. 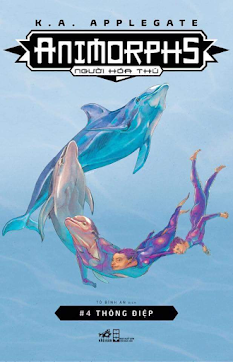 YOU ARE A NINETIES TEEN

While walking home from the mall with your friends; the other PCs, you decide to take a shortcut through an abandoned construction site. A spaceship lands in the middle of the site, it's pilot, a bright blue Psionic Centaur, comes out mortally wounded and explains to you that he is a general of his people and that your planet is now on the front lines of an interstellar war. His people's enemy, the parasitic Brain Slugs, have found humanity to be an excellent host species and are infiltrating all levels of human society. He explains that you are the planets only hope, and must fight a secret war against the Brain Slugs until Psionic Centaur reinforcements arrive. He bestows upon you his peoples greatest technology, the Morphing Cube and promptly keels over, dead. Good luck! 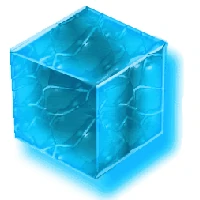 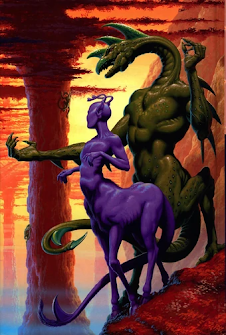 Psionic Centaurs - Blue with eyestalks and scorpion-tails. Telepaths known for their advanced technology. Have been leading the war against the Brain Slugs for a generation, Earth is just one front. The only species with the power to morph, it is a great taboo for them to give them to a more primitive people. Thus, it is advantageous to you that the Brain Slugs think that you are a band of Centaur guerrillas rather than morphing humans, you would do well to keep up this façade. Any allied alien PCs will likely be of this race.

Brain Slugs - Small, devious parasites that can enter another being's body through the ear canal and take over all brain functions, including basic motor and speech control, and gain access to the host's memories and personalities, essentially "becoming" that person. Host infested by Brain-Slugs are known as Controllers. They have found that humanity make ideal controllers due to being sturdy, fast-breeding and easy to conquer. They plan to completely enslave the human race. They have access to powerful laser guns. The leader of the earth invasion is Admiral Three, the only Psionic Centaur controller and therefore the only brain slug who can morph, he has a slew of horrible and dangerous alien monster forms.

Brain Slugs must leave their host bodies every three days to absorb a particular kind of radiation produced in their Slug Pools; replications of their home planets natural environment (they've built one underneath your home town!). This is how you can tell someone is a controller and also how you kill a brain slug; kidnapping their controller and holding them somewhere, depriving the Brain Slug of radiation till it shrivels and dies.

Bloodhound Worms - Another enslaved Brain Slug host, but they mostly don't really mind being slaves as long as they are fed. Enormous maggot-centipedes who live for eating and violence. Semi-aquatic with an excellent sense of smell.

The Ancient Preserver - A mysterious and unthinkably ancient galactic superintelligence of near-godlike power, takes the form of an wizened old man when speaking to humans. Dedicated to the preservation of life and locked in a millennia-long "game" with his counterpart, a similar being dedicated to life's destruction. Will not use his powers to provide any direct aid, but may be convinced to grant a wish in exchange for a favour. Wishes can include restoring the power of morphing to someone trapped as an animal. Favours usually involved being transported to a far flung corner of the galaxy to fight the agents of his rival.

Pacifist Androids - Creations of the Ancient Preserver, have been living on earth since the bronze age, blended in to human society while keeping their creators code of non-intervention. You do not start out knowing about them. Will aid you if discovered, they are absolute pacifists so will not fight but can make excellent spies.

7. Older Sibling who has Had Enough

8. Alien ally (has a human morph made from spliced combination of the other pc's DNA, subject to all the normal rules of morphing).

Should probably be a medium sized town, in a country that has at least some large and reasonably dangerous wild animals native to it. The town should definitely also have a zoo. The books were set in Northern California iirc but play around with a new setting. What if Prince Elfangor had landed somewhere in Eastern Europe, replacing  the series' Clinton-Era suburban idyll with a post-soviet aesthetic? What would the story look like set on the outskirts of Nairobi, Calcutta or Santiago? 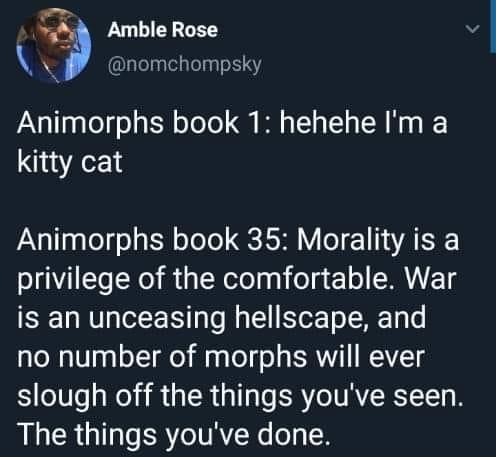 I would probably run this basically by  following the opening events of the series but with the PCs replacing the Animorphs and run the Yeerk's (Brain Slugs) plans as they appear in the books, reacting when things inevitably go off the rails and asking "what would the Slugs do here?"
Make sure that at least one player, preferably the GM, is familiar with animal biology as it will become important during play. I'm a zoology student so if I ever decide to run this then that base is covered. Expect many arguments to the tune of "who would win in a fight between a grizzly bear and a gorilla" these are cool and good and part of the game.
Play the slugs as cruel and domineering and the Centaurs as cold and uncaring, neither have Earth's best interests at heart truly.
The Animorphs series is full of moral dilemmas and compromises, give the players easy but extremely unethical ways to greatly weaken the invasion early in the game when the risks are relatively low and make them wish they had taken the immoral path later on when controllers are breaking down their doors and kidnapping their characters family. Make them paranoid, make them question who their allies are; Anyone could be a controller or Admiral Three in a morph, are the Centaurs really even their friends?

1990s Ephemera to reference at every available opportunity d12:

Gingerly dipping my toe into Free Kriegspiel / Ultralite rpg design for Jim over at d66 Classless Kobold's challenge : "My challeng... 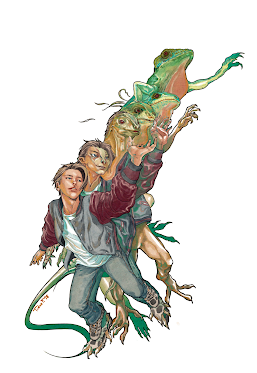